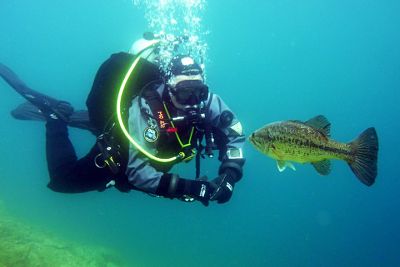 Kai Robert Moser, a self professed geek and founder of DIVER-ID.COM, is a professional IT Consultant for domestic and international organizations via KAIMOSER.COM in addition to being a professional diver. Mr. Moser has consulted IT clients regarding security for organizations like Volvo IT North America's Windows Sever Security Team and Volvo IT Global Security Team for Volvo AG. Mr. Moser performed systems support and systems security work as senior engineer for the Intel Services Team and engineering project manager for the Enterprise Architecture Team at Guardian Life of America. Guardian is a conservative, one hundred and fifty plus year old Wall Street insurance and investments firm and was ranked as #250 in both Fortune 500 and Fortune 1000 of May 2012. Stress was far too high on Wall Street. Morale was far too low. Something had to change for Kai.

One day Kai had to pull a young teen's body out of the rescue boat at a well known dive site in Bethlehem, Pennsylvania.

He was volunteering as a demonstrator and underwater guide for a popular drysuit manufacturer based out of San Diego, California. As a DAN Dive Emergency Specialist, Kai responded when called to duty for a horrible situation where it was too late to save a young boy he had personally known and worked with as an open water diving student. The sixteen year old had been diving with his father for about a year before his fatal accident. Everything that could be done was done, but it was too late for the teenage boy. All Kai could do was wish he could have done something more for the greiving and distraught father. That did it for Mr. Moser. It was a crucial turning point. He couldn't just forget it or get past it.

Kai was driven to stop toiling away in a stressful IT job he often hated and decided to create an identification decal which could save lives better than any other sticker or decal before it.

Thinking about the serious stress of following the wrong dive leader or group and how very dangerous such confusion can be at depth, he examined existing ideas and made his own dual-layered, hand crafted, custom decals. He had samples made from several vendors, and spoke at length with some very large outfits who could do mass production with lesser raw goods. In the end, he felt they were best made using his own choice of materials. He started by selecting the very best raw vinyl adhesive materials and recognizing that dive safety decals are absolutley critical in very low light situatons, such as deep depths. Diver-IDs are truly eye catching when they need to be...at depth and when looking for one's gear.

Kai's newly coined "Diver-IDs" were easily noticed and made the wearing diver rapidly identifiable at depth, while still being highly flexible and adhesive. It gave Diver-ID.COM its first trademark, Get Noticed. Get known.™ because the product did EXACTLY as it was engineered to do, it got the diver noticed and known at deep, dark depths, when only a small flashlight or torch was available for light and identification purposes.

Mr. Moser parted ways with Wall Street after five years in that most stressful of shark tanks. He is much happier now. Kai is an evangelist about safe diving and his online dive safety equipment company, Diver-ID.COM. These days we find Mr. Moser continues to consult small business clients in technology matters, but he worries far less than while he was securing and managing Wall Street server systems. He enjoys teaching others how to enjoy the sport of diving, and loves taking people on trips diving all over the world. Diving is his true escape, his zen, his happy place...whatever you want to call it. It is his peace and calm. It is where no one can call him with their technical problems or complaints about life in general. Peace and quiet...one tank at a time.™

We are ALWAYS thankful for your business and will do our best for you, our customers.

Diver-IDs on your tank don't just look cool, they offer safer diving for you and your dive buddies.

Your cart is empty.